The water rippling o’er the bars whispers these words to me:
“You came and swam in my cool depths when you were young and free.

Then all your worries were so small and how the world was wide;
But now the world has wearied you, come here, a while abide.

For I have waited patiently while you were far away,
And deep within my heart I knew that you’d return one day.

Your step is slower than before, for many years have passed,
And you have aged, as too have I, but I still flow as fast.

Come rest your body and your soul here by my crystal pools,
Where long ago, my glistening rocks, to you were precious jewels.”

Come land, you mongrel, on that jutting snag,
By your disgusting droppings washed with white.
It’s twilight, but before the fall of night,
My rifle says I’ll have me one dead shag.

You feathered terrorist of perch and cod.
You serpent of the waters and the sky.
Before the day is spent, here you will die.
Prepare, you thieving bird, to meet your god.

Now gone, the moat of ocean wide and deep,
As in the north appears a bridge of land
And on the beaches, footprints in the sand.
The spreading hordes through virgin forests creep.
With club and spear, a harvest rich they reap,
As fire-sticks strike and high the flames are fanned
As winds of change sweep through this ancient land
To wake it from its long primeval sleep.

Now clear are seen and heard portents of doom:
The plumes of smoke, and too, the warning sound
Of feet that stamp upon the blackened ground.
Thus giants the land had nurtured in her womb
Will but in dreaming legends soon be found –
Invaders will consign them to the tomb. 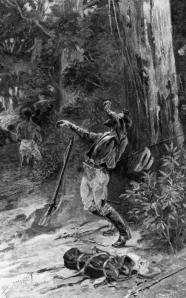 Through the swell and the spray on the twentieth day
Sailed the barque “Tam O’Shanter” that May,
And behind in her wake, the corvette “Rattlesnake”,
As they swept into Rockingham Bay.

Thirteen men the boats bore, and the stroke of each oar
Brought them on to that forbidding shore,
Where they set out to walk to the tip of Cape York –
All that lay in between to explore.

They were bushmen and tough and would brook no rebuff
As they conquered the rugged and rough
Ridges ragged and green, steep and split with ravine,
And descended each perilous bluff.

But soon rations grew short, with their strength the miles bought,
And with peril the enterprise fraught.
With their goal growing dim, faces hopeless and grim,
Dreams of glory were coming to naught.

Over hellish terrain, all done in, wracked with pain,
Struggling on with but honour to gain,
Ever northward they trekked, bodies starving and wrecked;
Now their struggle was clearly in vain.

From the swamps and the heat there would be no retreat,
And but two left to witness defeat.
One now close to his end – Jackey Jackey, his friend,
And the tragedy almost complete.

After such a cruel test where he gave of his best,
From a wild black, a spear pierced his breast.
Twenty miles from the cape, by the river – “Escape”,
Edmond Kennedy went to his rest.

From Syria to Milne Bay,
At Shaggy ridge, the fall of Lae,
Two men had seen each other right,
Now one last battle left to fight.

From landing craft they hit the sand;
At Klandasan the diggers land.
The Alligators roll ahead,
But quiet and still, a man lies dead.

He thought the end within his reach,
But now he sleeps upon this beach.
His blankets are the tropic sands
And at his head his rifle stands

With slouch hat for a digger’s cross,
For those to come, to mark the loss,
As by the grave there stands his mate;
For some the war will end too late.

Was the first of July and the war all but won
But the foe wouldn’t bow to the bomb or the gun
So a mighty fleet gathered off Borneo’s coast
Under Douglas MacArthur – the lord of the host.

And he knew as he gazed at these ships on the waves
He was sending survivors at last to their graves
For these men battle hardened by six years of war
Were a sacrifice sent in to settle a score.

In a month would Japan by a maelstrom be lashed
As its cities to atoms were shattered and smashed,
But the Empire must burn, the inferno be fanned,
And the battle be joined, so he gave the command

And the land burst to flame like a funeral pyre
As the rocket ships streamed to the beaches their fire
And the smoke black and choking rose high in a cloud
Where it lay o’er the carnage – a simmering shroud.

As the fleet from their guns sent their salvos to land,
Where the broadsides spewed skyward the souls and the sand
And the blasted earth heaved as the very air burned
As to oil were the guns of the battleships turned.

And the shells tore and twisted the towering tanks.
Burning oil spilled and blistered the cowering ranks
As defenders, defeated, lay dying or dead,
Shone the sun through the dark of the sky bloody red.

As they swiftly surged on through the sea’s salty spray
To the beach scorched and peppered, a ribbon of grey,
The defenders’ defiant artillery blazed
As the troops hit the shore and the Southern Cross raised

And the Rising Sun rent, but was still much to fight,
Not so easily quelled was the Emperor’s might
For each bunker must yield up the mad and the brave
And the flame throwers make every pillbox a grave.

And each yard of ground gained did it come at a cost
And each hour of each day were so many lives lost,
For the Japanese fought without care of their life
But no digger now sought for a widow his wife.

And the war it was ending, the finish was near,
But there’s many the soldier would find his rest here,
For these men of Kokoda, that pitiless track,
From this last gasp of war, they would never come back.

In memory of the men of the 7th division AIF and in particular my father,
Sgt Noel O’Brien 2nd/31st Batallion who was in the first wave to hit the beach.
Also of the U.S. troops who manned the alligators and other landing craft 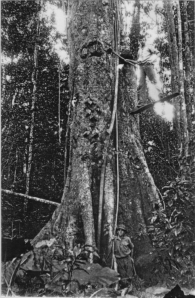 I’d been out splitting posts in the sun’s blazing heat,
So I rested a while in the shade
Of an old vine scrub camp – used a stump for my seat,
With a stone there I sharpened my blade.

With my billy swung over the flickering fire
I reclined with my head on a log,
And the work and the sun and the heat tend to tire
So my mind drifted off in a fog.

From the depths of the camp walks a man dressed so strange,
Like the blokes in those old photographs.
At his side trots a dog, old and tattered with mange,
As the man walks up to me he laughs:

“G’day mate, could you spare me a cup of black tea?”
I obliged , was the way of the land;
“And a slice of your bread, if you could please?” says he,
As he holds out a bronzed weathered hand.

“Thank you cobber,” he says and he takes off his hat,
An old slouch hat all stained with his sweat;
“It was me and my mates, well we cleared this here flat,
This old mongrel here, he was my pet.

Yes, the scrub on this flat was the best I had seen,
We were young, had strong arms and straight backs,
And the cedar and beech, and the fig and black bean,
Well we felled them with springboard and axe.

We’d no use for the logs, just the ground for the plough,
So we burnt them wherever they lay;
There were some big old stumps, but I don’t see them now,
O’er the years they have rotted away.

But the cattle need shade, so we left this here camp,
And that cedar’s where I carved my name.”
And he read what was writ on its trunk like a stamp:
“Dan O’Brien 1914 – the same.

I’ve not been back till now, as I traveled for work,
For the scrub was cut out all around.
I enlisted for fun, and I fought Johnny Turk,
And now mostly I sleep underground.

But it’s been nice to meet you – and thanks for the grub,
For you seem like a good sort of bloke,”
And he whistled his dog and strode into the scrub,
And was gone in a shimmer of smoke.

I awoke with a start, and went straight to that tree,
I must know what that inscription said;
It was carved, old and gnarled, in the bark plain to see:
“Dan O’Brien 1914”, it read.

Scrub/Vine Scrub: Subtropical and tropical rainforest of Queensland
and northern New South Wales.
Camp or Cattle Camp: A group of trees left for shade for cattle
when the forest was cleared.
Billy: Tin can suspended over a fire to boil water for tea etc..

Dyin’ stockmen bitin’ dust
Sweepin’ wheat fields stained with rust
Goannas stuck up holler logs
Grown men cryin’ over dogs
Battlers on the western blocks
Plantin’ stones and growin’ rocks
Brave men crossin’ desert sands
Dancers dancin’ – country bands
Drovers singin’ lonely songs
Outback heroes rightin’ wrongs
Golden holes where treasure gleams
Slowly creepin’ bullock teams
Sun a settin’ in the west
Magpies buildin’ a new nest
In a tall and stately gum
Stockmen gettin’ drunk on rum
Catchin’ buffs and shootin’ pigs
On high springboards fellin’ figs
Wattles swayin’ in the breeze
Faithful prayin’ on their knees
Wives a waitin’ at the rails
Husbands tellin’ doubtful tales
Ringers sittin’ round the fire
Seein’ who’s the biggest liar
Rivers turnin’ into mud
Rivers in a ragin’ flood
Rivers runnin’ red with blood
While a cow chews on its cud
Wild blacks spearin’ settlers
Lonely camps of fettlers
Steam from an artesian gush
Thunderin’ hooves as cattle rush
Horsemen cuttin’ cattle out
Bones a bleachin’ in the drought
Farmers and their crazy schemes
Farmer’s sons with foolish dreams.
These are just some of the themes
Wrote about on reams and reams.
Writ with metre and with rhyme
Mostly of a bygone time.
Some may say it’s had its day
And it’s true it doesn’t pay
But while bush bards have their way
Like the bush it’s here to stay.

On dusty tracks and outback roads
The juggernauts haul mighty loads,
Hearts beating with explosive power
Around the clock in every hour.

They follow not a track of steel,
No rail they need to guide each wheel
For they are steered by human hands,
Not bound by shackles to iron bands.

Neath shining stars – on blackest nights
They thunder by, ablaze with lights,
Past roadside bush that heaves and shakes
With wind that whistles in their wakes.

To each remote and distant place
They roar with unremitting pace,
Through desert dust or flooding rains
Go rocking, rolling, great road trains.

Poor Molly met her death today,
‘Twas murder so the whispers say.
I knew her well, for her I grieve,
May paradise, her soul receive.

The evidence was quickly found:
Ripped garments on the bloody ground.
The last place where this girl had been,
But Molly’s body nowhere seen.

Was it a dingo passing by?
Perhaps an eagle from the sky?
Who done it? Now the question begs.
Some scattered feathers – no more eggs.