He had the cheek to question climate change!
Opposed the vote to let same sexes wed!
Conservative! Damn! For a priest that’s strange;
The Pope himself is several shades of red.
He wasn’t keen on Pell, or so it’s said.
Perhaps he’s happy Pell is in the can,
And sleeping on a rock-hard prison bed.
One victim’s claims enough to sink the man;
But after all the crap the papers ran,
What jury would have let the guy walk free?
There’s nothing like a sex scandal to fan
The flames — appeals? We’ll have to wait and see.
But I don’t like his chances — I confess,
Each day I value “justice” less and less.

You “like” memes on Facebook? Good for you!
Having said that — I’ve seen quite a few
That I know are just lies,
So I’d tend to advise
You — make sure the meme’s message is true.

There is an isle of sanity
Surrounded by an insane sea;
And on its wicked wind-whipped waves
There sail the ships of Satan’s slaves.

The slaves look to the island’s shore
And make their plans for holy war.
The sane upon the isle they fear,
Yet to destruction still they’ll steer.

For they believe the isle does mar
Their chosen hell – Its sacred star,
Its symbol, they will rend and smash;
They’ll burn the hated isle to ash.

So many times they’ve tried and failed,
But sanity each time prevailed.
But mad men driven by mad dreams
Will not abandon their mad schemes.

And though it’s plain that they will fail,
Their ships they’ll man — the isle assail,
With faces masked, black flags unfurled —
The navy of the underworld.

It’s not my fault – I had an awful start.
What chance had I to ever see success?
When I think of my woes it breaks my heart;
No wonder all my dreams are in a mess.
What happened to me? – perhaps you can guess:
I’ve been unlucky since I was a kid –
No luck at all – I couldn’t have had less.
I tried so hard – no matter what I did
It came to nothing, for I couldn’t rid
My mind of all the failures in my past.
And so I shut myself away and hid,
And so had nothing left to lose at last.
But all your losses in the past are dead;
They only live within your loser’s head. 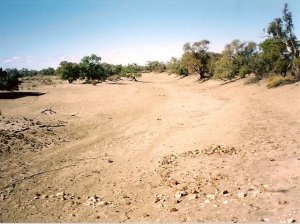 Like inland seas that stretch to far horizons,
The swirling waters soak the sodden plains.
And brown and foaming flow the streams flood-swollen,
Swelled high and wide by teeming monsoon rains.

The arid deserts bake in summer heat waves,
While ancient stream beds dream of former days.
The deluge on the coast flows out to oceans,
As sense and “progress” go their separate ways.

{Image of the Paroo River by Peter Woodard via Wikipedia} 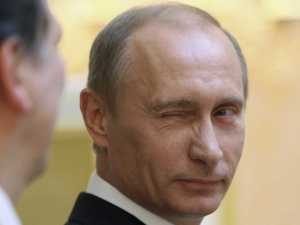 I’m moving to Russia to sing Putin’s praises.
I’ll live on the steppes where wherever one gazes
One sees far horizons, her vast open spaces,
Her beauty, her bounty. I’ll travel to places
Where never again will I hear folk complaining
Whenever from dull skies it’s snowing or raining.
I’ll go to the cities and see all their wonders,
And study the past and the Soviet blunders.
I’ll write formal verses that praise Vladimir,
And hope that he’ll have me around for a beer.

A Sonnet for Rebecca

She has a sense of humour quite refined;
And common sense? — of that she isn’t short.
Courageous? Yes indeed — she speaks her mind;
For those without a voice Rebecca’s fought.
She has integrity — she can’t be bought —
No one would try, her character’s well-known.
I guess these were the values she was taught —
Her faith in them throughout the years has grown.
She faces now a test – but not alone,
For closest friends, and some she’s never met,
Are with her — in their thoughts and prayers they’ve shown
Their love and their concern — know she won’t let
A temporary hurdle stop her run;
This cloud will pass and soon reveal the Sun.

Is the Pope a Catholic?

I think I’ll rewrite “Moby Dick”.
Of all its sexism I’m sick!
Ahab will be gay,
Crew trans – by the way,
The heroin, black – “Moby Chick”!