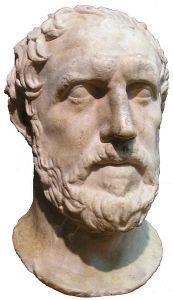 Now Melians, consider what we ask:
Swear loyalty to us and none shall die.
For what’s transpired we’ll not take you to task;
But now surrender, lest our arrows fly.
Athenians – surrender? – tell us why?
Our city, in this war it takes no side,
Though it is true to Sparta we’ve a tie.
But you, so mighty – can it be denied
That Melos could not swell the Spartan tide?
We won’t accept your claimed neutrality,
For Spartan ships, your harbour they have plied.
We’ll have no truck with weak morality –
To conquer you is right; it would be wrong
To spare you – Athens must be seen as strong!

Would you alarm the other neutral states?
Will they not think it’s Athens they must fear?
Our friends and allies know we hold them dear.
Not one, we think, disloyalty contemplates;
To Sparta they will not open their gates.
But island states that are to Sparta near,
Towards which may those Spartan triremes steer;
Their destinies we’ll not leave to the Fates.
It would be shameful were we not to fight!
Oh no, not shameful – you would surely lose.
We are the stronger – you would all be slain.
But we believe there is a chance despite
Your strength, and so we feel that we must choose
To stand and fight – perhaps a victory gain!

The Spartans too will come to our defence.
Self-interested Spartans fight to win
A victory for you? – they have more sense!
They will, we think, for Spartans are our kin.
With them we share our ways – our discipline.
And too, the gods are on our side – we’ll fight!
The Spartans would not spread their ships so thin.
Our navy would put such a force to flight.
The gods will watch as weakness yields to might.
So one last time we ask you – make your choice.
Think of your people – make the one that’s right.
We men of Melos answer with one voice:
Return to Athens, tell them we’ll not yield!
Oh foolish Melos! – now your fate is sealed.