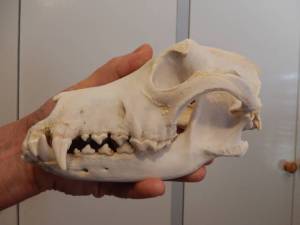 Alas poor Rover, he is losing weight.
I try to tempt him with the choicest meat,
But no, he doesn’t stir – old faithful mate.
I plead with him, but Rover just won’t eat.
No longer does his friendly “woof woof!” greet
His friend and master, me, when I return
To my abode – he is no longer fleet
Of foot. What’s more he doesn’t wish to learn
New tricks – and now I think I do discern
That good old Rover may in fact be dead
And gone – that Rover’s taken quite a turn,
And for the worst – he’s but a bony head,
Poor mutt – no wonder he has been so dull –
A dog can’t wag its tail when just a skull.

The vet tells me that Rover is deceased.
He’s been dead for some time apparently.
The vet, after examining the beast,
Arrived at that conclusion for a fee –
A handsome fee in fact – he said: “I see
No body and no legs or paws – a head
Is all that’s left of him – do you agree?”
“Oh yes indeed, it’s plain to see!” I said,
“Is that why Rover refused to be fed?”
“Such dogs, I’ve found don’t eat”, replied the vet.
I countered: “Dogs that won’t eat then are dead?”
The vet: “You are the strangest man I’ve met –
He’s dead – the consultation is complete.”
I said: “Well I knew that! – he wouldn’t eat!”

Stands motionless, with spear haft thrust
Into the desert’s scarlet dust.
Upon one leg, foot on one knee,
Dark eyes through shimmering heat-haze see

Blurred forms towards him leap and bound
Across scorched plains of arid ground.
His muscles flex as ends his wait.
The lance is raised and now too late

The mob explodes in mortal fear
As woomera launches the spear
Of gidgee hardened by the flame;
Its flight is true and so his aim.

One kangaroo, gore-splattered grey;
A feast, his tribe will have this day.
He draws his weapon from the dead;
The jagged point glistens blood-red. 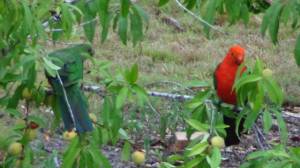 It’s said that life is suffering, yet birds
That come to my backyard don’t suffer so.
They seem quite happy, speaking, not with words,
But songs, of chirps and whistles – they don’t know
What lies in store for them – each day they go
About their business with no thought of what
May come. And when in winter, chill winds blow,
They don’t complain, nor when the wind blows hot.
Perched in a tree, the future matters not –
They sing, for they are blessed with tiny brains;
Have not the power to worry, plan or plot.
It’s true they look bedraggled when it rains,
But soon they shake their feathers and they’re dry.
And though they don’t think deeply…..they can fly.

To a Dead Girl

Are you with God? Serene now is your face
In death – in satin and in lace,
So pretty there you lie today,
How could such beauty pass away?

Invasions, back then, they meant war.
The bullets would fly – cannons roar.
But now come the orders:
“Let them cross our borders,
Lay down your arms – open the door.”

He sits there in the winter’s morning sun.
His pale blue eyes have faded with the years,
And shed in solitude some bitter tears.
This man so frail, could he have been the one
Whose wasted arms once held a victor’s gun?
He’s seen the darker side, no death he fears,
But as the day of reckoning it nears,
He wonders was the loss worth what was won.

His life, a story mixed of hope and toil.
The years have gone – how rapidly they fly.
And now he sees the enemy is nigh –
A foe no bullet and no steel can foil.
To fight and win but finally to die,
And gain at last a tiny patch of soil.

All things that rise up to a peak must fall.
Even the tallest towers of Earth’s empires.
The strongest life-force, given time it tires
And slows and dies – it matters not at all.
A being or a mountain or a wall,
Churches and mosques with heaven-pointing spires –
They all must yield to death, to rain and fires;
All things will be brought low, that now are tall.
The rocks will one day all be ground to dust.
New rocks will rise and reach towards the sky.
The world will once again be clothed in ice,
And steel that girds the world will turn to rust.
Yet what is low, in turn will be brought high,
Until the time comes for its sacrifice.