I once had a girlfriend named Alice,
Who lived in a beautiful palace.
Her father the King
Disapproved of our fling;
We asked why, but the King wouldn’t tell us.

My beautiful princess named Alice,
Invited me up to the palace.
She said we would dine,
And get sloshed on red wine,
Which was served in the King’s silver chalice.

Now Alice’s father quite hates me;
Gets angry when e’er Alice dates me.
He orders his guard:
“Quick! evict this blackguard!
For my daughter and he will not mates be!”

Now Alice and I are eloping;
From her window to ground – ladder roping.
No one knows of our scheme,
And the King’s in a dream,
For his hot cocoa we have been doping.

For a while we were happy as Larry,
And together long nights we would tarry,
But then Alice would sook,
When I asked her to cook,
Doesn’t pay for a princess to marry.

Now Alice my missus skedaddled,
With a commoner wouldn’t be saddled,
But I would be lyin’,
To say I was cryin’,
For Alice’s brain – it was addled. 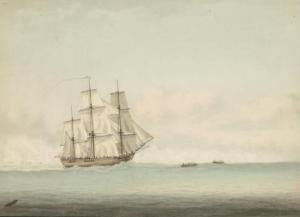 On the 11th of June 1770 HMS Endeavour under the command of Captain James Cook grounded on the Great Barrier Reef off the east coast of New Holland (Australia). The Endeavour came close to sinking but was eventually refloated and beached at Endeavour river for repairs, Cook later described the passage between the reef and the mainland as an “Insane Labyrinth”.

Between the mainland and the reef they sail
With shoals and islands all around.
“Ten fathoms – sandy bottom!” is the hail,
Then strikes the reef! – they’re stuck aground.

Take in the sail and launch the boats to sound –
Four fathoms to four feet they read;
Before the rising waves to pieces pound,
The bark Endeavour, must be freed.

With capstan, windlass, from this peril draw
Before the sea her timbers breach,
And fothered, then make for the barren shore
And haul her bow upon the beach.

Repair and rest then climb the highest peak
And gaze upon the hopeless sight.
Hides there the passage Captain Cook must seek;
Sees only from this lofty height

An insane labyrinth of shoal and reef,
Of danger beckoning them there.
This navigator blessed with self belief,
He’ll not surrender to despair.

So all the way by lead and line they sound,
‘Round obstacles they thread their way.
And there the waves upon the great reef pound;
For passage through that reef they pray.

Then eyes that strain, see – there the reef it breaks!
And soundings – deep the water shows
And under sail she for the passage makes
As now the wind from shore it blows.

Pacific’s waves break white – the wind it wails;
Endeavour’s deck is drenched with spray
As bravely through the narrow gap she sails
Then safe in open sea makes way.

And now this ship, the first upon this coast,
To home is bound with all her crew
And other men in times to come would toast
The strength and courage of these few.

Were you given the chance to relive your life
With all the moments of joy and strife,
All things to happen in ways the same,
The same results from the same old game,
No knowledge at all of what came before,
No chance to change or to up the score.
If given this chance what would you do?
Would you decide after thinking it through,
To treat this gift as from Heaven sent
Or with your memories, be content?