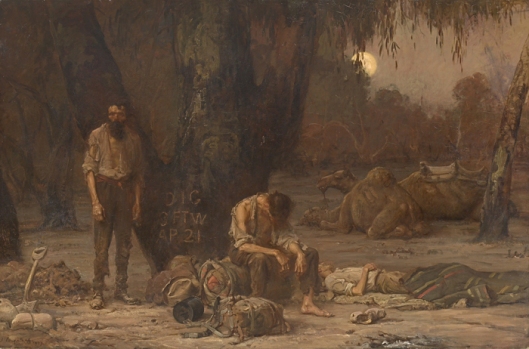 The Burke and Wills expedition attempted in 1860 – 1861 to cross Australia from Melbourne in the south to the Gulf of Carpentaria in the north, a distance of some 3,250 kilometres. The expedition of 19 men and many wagons, horses and camels was led by the Irishman Robert O’Hara Burke with William John Wills second in command. They established a depot at Cooper Creek from where Burke, Wills, John King and Charles Gray made a dash for the Gulf, with William Brahe left in charge at the depot. After terrible hardships they reached within 24 kilometres of the Gulf before having to return. Brahe waited 18 weeks for them to return, eventually leaving just 9 hours before they returned, weak and starving and minus Gray who had died on the return journey. Brahe’s party had left stores buried near a Coolibah tree which still stands to this day, and which is blazed with the word “Dig” to indicate the location of the buried stores. All together 7 men died on the expedition including Burke and Wills who died some months after returning to Cooper Creek. Only King would eventually be rescued. He never fully recovered however, and died 11 years later aged 33.

How could this be, that after months of hell,
Of blasting heat and sands of deserts crossed,
That now but this blazed coolibah to tell
The wretched men, for them all hope is lost.

There on its trunk the message cut so clear
That but nine hours before their comrades left,
And they now weak, can sense the end is near
As Burke regrets the folly that had cleft

His party all those months before, when he
Had dashed with King and Gray and Wills
To reach the gulf, now but this wounded tree
To mark where buried store, such bitter pills

That at the end of this great quest delay
The deaths of brave men, starved and weak,
Abandoned on this melancholy day
By Bullah Bullah on the Cooper Creek. 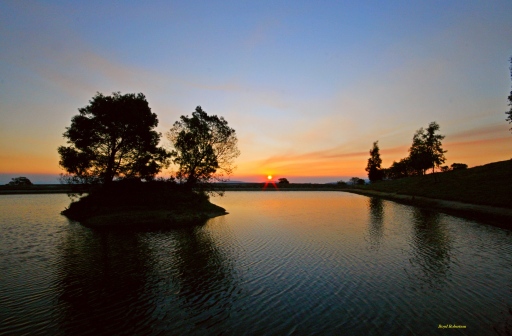 As in the west, gilded with light,
Are laid the shrouds, once clouds so white,
Upon the far horizon bright,
As mourners cloak the dead from sight.

And trees that watch the sinking sun
Know that the night has just begun.
Know that the light of life has ceased
Till born at dawn there in the east.

Like sable coils of twisted cord that glisten in the light,
Scales round with tiger stripes are scored, death spoiling for a fight.
Draped on a stump – a tree long dead, bone dry in heat of day.
A flickering fork from poisoned head that smells the air for prey.

Mulberry bow, black fletched with crow – an arrow, notched, half drawn.
The boy, the hunter, stealing slow, makes not a sound to warn.
The serpent looks with steely eyes that see no danger yet.
Though close below its burrow lies, the hunter’s trap is set.

A powerful arc, a full drawn bow, the snake in mortal fear,
It dashes for its den below, an arrow thudding near.
A blur of sleek uncoiling rings, swift down the hole it glides.
The bow string twangs, the arrow sings, through flesh and bone it slides.

The threshing tail flies side to side, a writhing lashing whip.
Escape from certain death denied, held in the arrow’s grip.
The hunter draws it from its lair, lays on the ground his prize.
The vanquished of a contest fair, like bloodied rope it lies.
And so plays out the ancient duel ‘twixt snake and son of man.
Lays slain the fleeing serpent cruel, as in the Maker’s plan.

I’d once a job now thought as green
Involving doing things marine.
My job involved collecting gas
That issued from a fish’s ass.
I’d dive into the briny deep,
Collecting fishes’ farts to keep.
I needed ones of different size
But found it wasn’t very wise
To sneak up on a shark’s behind
When it had murder on its mind.
For small ones I was always keen
To find a flatulent sardine.
So if you feel you’re in a rut,
This job is interesting – but,
It really is a lot of trouble
To get a spirit level bubble.

So lonely stands this poor unburdened beast.
This carrier of sustenance and feast.
Exposed all day to driving rain or sun.
Abandoned once its usefulness is done.

With silver coat or aged to rusty hue,
And mostly is its health check overdue.
Its owner’s name is branded on its hide.
It even has a small saddle to ride.

And each day come the bands of boys and men,
To catch these strays and take them home again.
When pushed it moves with an unsteady gait.
It swerves from side to side towards its fate.

Its master curses it for being lame,
But then finds that the whole herd is the same.
A slave but with a mind all of its own;
It moves along with squeak and clack and groan.

Its ribs are bent and battered from its loads,
And from collisions, kicks and driver’s goads.
When home it joins its fellows in close ranks,
Until its turn to serve with little thanks.

We take for granted and we curse this mule.
The way it is abused is simply cruel.
It carries groceries, a joint to carve.
Without it modern man would surely starve.

In all these years design has hardly changed
Just handle, racks and castors rearranged.
It really is a piece of modern art:
The scorned and slighted supermarket cart.

The Faithful V the Agnostic…

If you’re without knowledge then what do you know?
for each day that goes by in my faith I grow.
I know that I don’t know the answer you see,
and there, you have said it – that faith is the key.
But faith is my centre, my being, my core,
I have ancient scripture – have no need of more.
Your scripture you see, is blind dogma to me
Your priests and your elders they rule by decree.
Authority, it comes from heaven above,
it’s written, our saviour, he died for our love.
Believe in an old book? there’s no way I can,
for I think your saviour was just a good man.
It seems that to differ we must both agree,
though faith is the answer – It would set you free.
No – logic’s my God, I’ll not worship a wraith,
for my mind is free of the chains that are faith.

Great oil companies they paid;
Ishi-kawa-jima laid
For a mighty ship a keel;
Built her out of solid steel.

Fifty thousand horse power geared;
Swiftly through the seas she sheared.
Sixteen knots her speed at top;
Took three miles for her to stop.

Half a million tons displaced;
Engineers a problem faced:
This the largest ship on Earth,
For repairs where would she berth?

On the globe no dock or slip
That could take this super-ship;
On a coast of mud and rock
Men must build a great dry dock.

Who would have the expertise?
Who would this great challenge seize?
Men who’d built the Snowy Scheme;
Men who weren’t afraid to dream.

At the Sembawang shipyard,
Thousands neath the sun toiled hard,
Sweating as the concrete poured;
Up, the mighty walls they soared.

Steel to reinforce its core;
Six feet thick the dry dock floor.
On a thousand piles it sits,
Driven deep by mighty hits.

Built by Theiss and Petrosea;
Filled with water from the sea.
In sails the great ship in turn;
Fits so neat from stem to stern.

Thirty feet she takes of draught;
Open up the culvert shaft!
Drain the water level low;
Behold the Globtik Tokyo!

He writes such crazy verses every day;
He’s post-post-post-post modernist I’d say.
With lines about reality and life,
Not gloom and doom and abstract inner strife.
It’s not left wing, it’s structured and what’s worse,
He’s not supported by the public purse.
He writes in what he calls a metered time;
He even has the cheek to make it rhyme.
It’s said his verse the sane can understand;
Such criminal behaviour must be banned.
This rebel’s works must be brought to an end,
Before this sort of thing becomes a trend.

You won’t get rid of bullying by making it illegal,
You’ll only line the pockets of a slimy legal eagle;
And you won’t grow in self esteem because you then can sue them,
The answer is to grow a spine so you can stand up to them.