The Daly (pronounced “daily”) river is in tropical northern Australia where
there are only two seasons: The Wet and The Dry..

By those northern river banks,
There in days gone by I wandered,
By clear streaming waters pondered,
Youthful hours were never squandered,
By those sandy verdant flanks.
Saw the rain in torrents falling,
Heard the native dogs there calling,
Saw from sea the rain clouds squalling,
By the Daly river banks.

Born upon a distant range,
All the streams that feed the Daly,
Flowing slow or tumbling gaily,
Come the rains it rises daily,
In a flash the seasons change.
Down the stony gullies creeping,
From the fissured hillside seeping,
Rolling clouds their tears are weeping,
Over all the monsoon’s range.

Sheeting over flats and plains,
By the creeks clear waters flowing,
To the raging river going,
As the land the heavens sowing,
Ever heavy fall the rains.
Then at last the gloom is breaking,
Sun asleep in cloud is waking,
Mud upon the flood plains baking,
So at length the wet it wanes.

In its middle reaches flows,
Beautiful and clear and gleaming,
By treed sandy banks it’s streaming,
With life in its waters teeming,
So it ever onward goes.
Over rocky bar it crashes,
Past the jutting sandbar dashes,
Dancing light in flowing flashes,
Cool but molten – bright it glows.

As the season turns to dry
Slowly flows the Daly river,
Piercing snags in currents quiver,
Sunken trees whose branches shiver,
Where at rest their bodies lie.
There a crocodile is sliding,
Close by muddy bank is hiding,
As the river calmly gliding,
Soft the passing waters sigh.

Now the waters grey and wide,
As her heavy heart is flagging,
Wearily her burden dragging,
In her race to broad sea lagging,
Battling the surging tide.
But there spreads the great wide water,
And from there to every quarter,
There’s no force on Earth will thwart her,
‘Till whatever fates decide.

There was a man, whose reputation in the land was strong,
In winter and in summer, honest as the day was long.
So all his friends advised him that before his time was spent,
He’d have to run for office and go into Parliament.

On honesty and openness this fellow then campaigned.
From telling lies or twisting truths he without fail refrained.
He told the people what he thought they all wanted to hear.
He’d tell his honest policies to all who’d lend an ear.

He said were he in government, then things would have to change.
He’d made a careful study and the laws he’d rearrange.
He’d have to cut some salaries and trim the public spend,
And half the public servants, to the dole queue he would send.

He said that we relied too much on borrowings from banks,
And we would be in trouble when the housing market tanks.
We’d all have to work harder, for we reap but what we sow,
And all restrictive legislation, out the door he’d throw.

And lots of other policies he said he’d put in place;
The nation would be better off – we’d be back in the race.
Give help to honest industry – he wouldn’t sell the farm;
He’d boost the military, so we’d all be safe from harm.

The people listened to him and his honesty admired.
They said his goals were admirable and what they too desired.
But they had all grown used to scams, pork barreling and lies.
Some wondered if this honesty was really very wise.

Opponents, unfamiliar with this new found idea – truth,
Just winked and nodded – said they’d see him at the voting booth.
He’s still around, he hasn’t changed, by all he’s still respected.
He got few votes, we needn’t fear, he didn’t get elected.

They are deadly they are dangerous and why do people want them.
Why, they must be crazy rednecks I would say.
And they kill hundreds of people every year it’s such a problem,
Ownership is just too high a price to pay.

We must ban these things and take them from the people who don’t need them,
We must vilify the ones who say they do.
And the owning of these weapons by the masses we must stem;
Any who think otherwise, we must eschew.

Yes it’s time that we restricted owning such deadly devices
To police and to the agencies of law.
For we’re here to cure the people of their democratic vices
and possession of such things is at the core.

And to those who say that this is an attack upon their freedom;
Why you’re really anti social and extreme.
We elite know what is good for you – we are the source of wisdom;
Everyone must now bow down to the Regime.

Now there’ll be a time of amnesty when you can bring them in,
Without fear and with a minimum of force.
And then once your motorbike is cut up and put in the bin,
We suggest you go and buy yourself a horse. 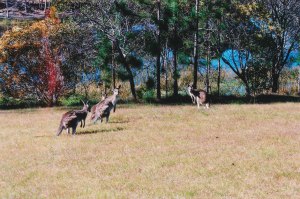 There is a field with grass and tree
And kangaroo and wallaby.
It lies beyond the city lights,
Far from where traffic snarls and fights.

There is a man who longs to be
Where there’s a field with grass and tree.
He buys the field and strips it bare
And builds his home, his castle, there.

He mows the field right to the ground;
No longer do wild things abound.
They have no place to live and hide.
The man is snug and safe inside.

The field is now a sterile waste;
It’s pretty though and to his taste.
It’s manicured and neat and clean;
You see the man is very green.

The evidence is there as proof,
With solar panels on the roof
And compost bin that’s always full;
His ceiling space is stuffed with wool.

To shape, his foreign shrubs he clips.
Each blade of grass he whipper snips,
And here and there he plants a palm;
They’re trendy so can do no harm.

The animals have moved away;
It’s just too green for them to stay.
The man is laying more concrete;
Destruction is not yet complete.

He tells his friends back in the smoke
He’s really just a simple bloke;
With nature he’s in harmony;
They come to visit – all agree.

And all his dreams have now come true
But still he feels a little blue,
For at his heart a nagging pain;
This sense of loss he can’t explain.

There was a field with grass and tree
And kangaroo and wallaby.
It’s concrete now and brick and turf;
A house so neat, where lives a smurf.

Upon a stream, upon a day so fair.
Upon a log that drifted slowly there,
There sat a frog who seemed without a care.
And joined him there to form a verdant pair,
His mate, and into her eyes he did stare.

For they had only recently been wed,
As down the stream their log now swiftly sped.
They’d promised to be true till they were dead,
But this devotion to disaster led:
They didn’t see the waterfall ahead.

Once there lived an alchemist in a strange and distant land.
So wise and famous and revered; great power he did command.
For he could turn base metal in a flash to solid gold,
And so the alchemist grew rich as he in years grew old.

The alchemist had riches, but a mortal man was he,
And came unto his house one day, a gypsy to foresee
His fortune with a crystal ball that showed his time was nigh,
So he, a magic potion made; his own death to defy.

And when this drink to give him immortality was made,
He took the potion to his lips, but then his hand he stayed,
For there his pet, a small brown mouse, was sitting on his knee;
He gave the mouse a sip and waited, the effect to see.

The time it passed, the mouse it thrived, so then he drank the brew.
Now safe from death, his fame increased, and so his fortune grew.
And so the years went by, he didn’t age, always was well.
He and the mouse lived on, and to them nothing bad befell.

The centuries rolled on, his friends and relatives were dead.
In time the human race was gone as onward time it sped,
But even Earth is mortal, and at last the Sun grew tired;
The Earth became a cold dark rock, its spirit had expired.

And all was black, for only feeble starlight pricked the sky,
And silence reigned for there were only two who didn’t die.
There gazing out to space, the last two tenants of the house:
A sad and lonely man, and by his side, an ancient mouse.

This morning, I went for a walk;
A stroll in winter’s morning chill.
I’d had a breakfast of fried pork.
For lunch I hoped to find road kill.

There were some toads squashed here and there.
A snake had clearly met his end,
But nothing I considered fare
Until I walked around a bend.

There lying in a crumpled heap,
(He’d surely parted from his flock)
There lay a bruised and bloodied sheep.
He’d suffered from a fatal knock.

It was a shame he’d come to harm.
A tragedy he’d had to die.
My wooly friend had bought the farm.
For lunch I’m having shepherd’s pie.

Lies only stand if the good are weak,
For only the truth is strong.
It’s to feeble minds that the liars speak,
Not to minds who know right from wrong.
And words are writ by the poets bought,
Those who care only for their purse,
And the price is paid for a message wrought,
To be hid in a metered verse.
Whether those who sell, or the ones in power,
They will catch the thoughtless ear,
And the seed they plant, it will grow and flower,
Into profits or into fear.

He profits from extended toes,
As o’er the lily pads he goes.
His call is just a quiet screech,
Although he’s not inclined to preach.
He’s tiny and he has no beard,
This lily trotter’s really weird.
He wears a robe – a feathered suit,
He’s light of foot, this little coot.
A miracle he doesn’t sink,
And end up drowning in the drink.
He seems so happy, not a care,
But then he has no cross to bear.

Just as a ship sets sail and leaves her berth,
Her goal a port across the sea,
A new life starts a voyage from its birth,
No knowledge of its fate to be.

Smooth sailing rarely is the course of life,
For storm and tempest all will see;
The course of men’s lives mixed of joy and strife,
In different measures though they be.

The chart of life a voyage by time drawn;
It inches on as days they pass.
The waves that break upon the reef at dawn,
The wary see with eye to glass.

There shoals exposed, as waves foam into spray
And siren’s voices tempt one on
To rocks, where wrecks of souls bemoan the day
They ventured close to ground thereon.

While some who founder, by bad luck are cursed,
Some careless to destruction sail.
The former despite care and thought submersed,
The later by their own hand fail.

The goal of life: To reach the port and rest
With sweet adventure on the way;
To navigate life’s ocean depths and test
One’s will, the charted course to stay.